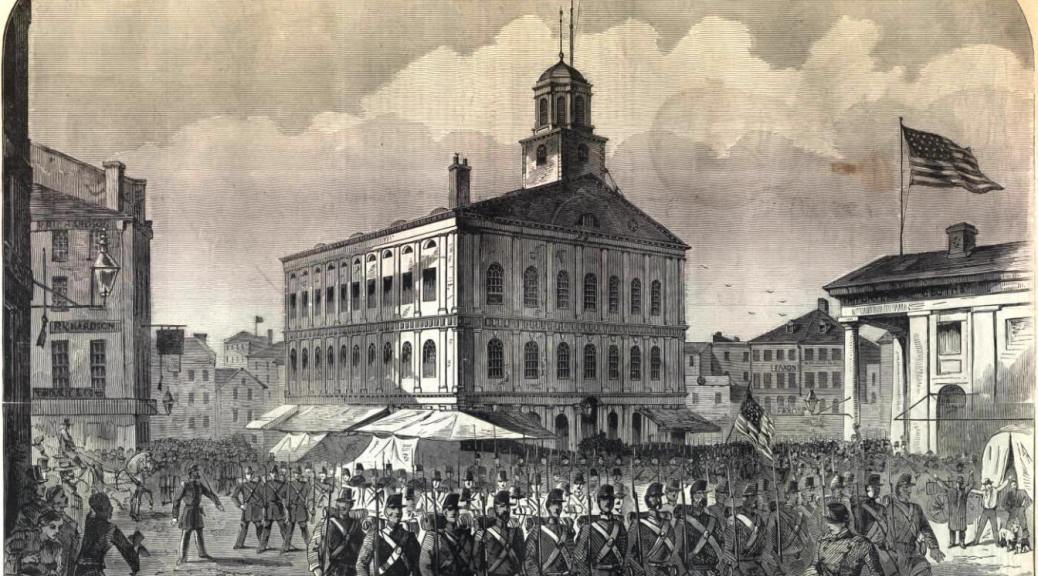 I now seat myself to write to you. I am in the Capitol of the United States as you will see by this date and I am here as a soldier to defend the country and the stars & stripes. I volunteered in Company E of the 5th Regiment of the State military of Massachusetts. I volunteered one week ago last Friday. I should have wrote to you before but I could not get a chance. As soon as I joined the company, we was marched to Faneuil Hall, Boston, and kept in the hall two days and nights without the chance of getting out. I did not get a chance to write home until I got to Virginia and they did not know anything of my going. I did not know anything about going until I volunteered.

Lydia, I know you will not blame me for going for if had been where I was, I have no doubt but you would have said go, by all means, and I know that your prayers will be for my safety and speedy return. And I have faith that they will will answered and I shall return to you in three months. That is the length of time that we are out for and I believe that God will bless us and if we have to fight we shall come out victorious.

I guess in the first place, I will give you an account of our journey. We started from Boston last Sunday morning about 5 o’clock and arrived in New York about 7 o’clock Sunday night. [We] marched through New York City and got aboard the boat about 3 o’clock Monday morning and the next place we stopped at was Fort Monroe, Virginia, which was Tuesday afternoon. Just before night we got underway and steamed up the Potomac river to a place called Annapolis in Maryland where we arrived about 9 o’clock Wednesday morning. It was splendid coming up the river to see the trees all leafed out and in full bloom but the most splendid sight that I ever saw was the harbor. When we got there, there was a large steamer in the harbor and all loaded with men for the army. There was about ten thousand men all dressed in uniform and the flags a flying and bands a playing. All went to make it very attractive and interesting.

We disembarked about 4 o’clock Wednesday afternoon. Annapolis is a naval school—a place where they train up boys for the United States Navy. After we was marched ashore, we was formed into line and drilled about two hours and at 9 o’clock marched on board the boat to stop all night and Thursday morning we marched ashore. Our duty that day was to help unload the stores for the army and drill and we did not do much of that for we was about tired out. At 8 o’clock that evening we took up the line of march for the depot—which is on the west side of the town—expecting to go in the cars the rest of the way to Washington. But we were disappointed, for after waiting until 11 o’clock, the cars was got ready but only about one-half of the regiment was able to get aboard and our company with three other companies was compelled to march on foot through the enemy’s country about 25 miles and we expected to be attacked every moment. The night was clear moonlight but a heavy damp air and the men was so tired that they would drop down by the way and it was most impossible to arouse them.

But after a hard night march, we arrived the next day which was Friday about 12 o’clock at what is called Annapolis Junction. Here we stopped that night with the cold ground for a bed and nothing over us but our blankets. But the next morning we arose in good spirits and well refreshed and about 11 o’clock we took the cars for the Capitol where we arrived safe and sound about 4 o’clock Saturday afternoon and took up our quarters in the Treasury Building where I expect we shall stop for the present. There is about 15 or 20,000 troops here at present and more a coming everyday.

Lydia, I fancy I can see you smile at some of the spelling in this letter but you must excuse me for bad spelling as I am surrounded by hundreds of soldiers and hardly know what I am writing and much more how to spell it. Lydia, although far distant, you never can be forgotten by me and nothing but the love of my country and to defend its flag could have tempted me to have taken my [leave and] and gone into [the service].

Lydia, as I had rather you would not go out to work, you will please accept a small present which I shall send you . I shall feel bad if you do not [accept it]. I don’t need it. Goodbye. May heaven bless yours most truly, — S. M. Bradadon